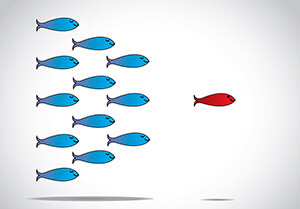 Do you have this Key Trait of a Successful Leader ?

Have you ever wondering why some leaders seem to have people who will follow them anywhere and support them anyway they can, when other leaders seem to struggle? There are many great traits of a successful leader, one of which is leading by example.

How many times have you been in a situation where someone told you what to do, but you’ve either seem them take no action themselves or even an opposing action? How did that make you feel? Probably not so great, and that person probably didn’t earn your respect.

Yet, maybe you’ve had a leader who jumped in to help you and others get something done, or you saw them previously show the participation they were asking for from you. I bet if you have, that person quickly comes to mind.

Early in my career I was often on teams where we would work late into the night. I can also easily name the leaders who we saw walk out the door at 6pm, even if they did offer a “good job team” as they headed out. In contrast, I still have great appreciation for the leaders who would stay while we worked, even if they could not contribute more than their moral support.

Don’t get me wrong, it is not a necessity for a leader to sit next to their workers all the time, but it is a sign of a great leader who sets the example. Demonstrating behaviors such as participation in a group, support and acknowledgement of the efforts of the team and representing the actions one hopes from others, speaks volumes to those around them.

I am grateful to all my leaders, both in my personal and business world, because each of them teaches. I have learned the actions I can take myself to be a great leader, and the traits that I choose not to duplicate. I am no cookie cutter of any one leader, but my personal leadership style has developed out of taking the best and avoiding the worst of those examples that have been set for me.

Who am I ready to follow and put myself out there for? The leader who shows passion and guidance, who I trust and respect, and that I truly believe can set me on the right path.

What traits do you look for in a great leader? What habit of a poor leader is a sign to you not to want to follow?

PrevPreviousSometimes I Wish I was Jane Jetson
NextWho is Invited to Your Special Dinner?Next