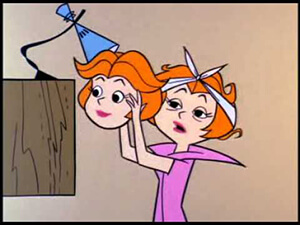 Sometimes I Wish I was Jane Jetson

When you need it most, the support of someone else, it can be the hardest time to ask or accept it. Recently I was facing some challenges in my business. I felt off track, unfocused and honestly alone. It was very difficult each day to show up and produce, when in reality I had no time to waste.

I was very lucky because the feeling didn’t last very long, but in truth it could have been solved a bit sooner if only I had reached out for help versus hid under my cloak letting no one in. The reason the feelings I was facing came to end was because I opened up to a friend.

For those that are not aware, I own my own business and it’s a team of one (and three quarters if you count the support from my husband in his spare time, and the overseeing that my dog provides). There are some benefits of being a team of one, but as many entrepreneurs and business leaders will note, it can be very lonely. You don’t always have someone to share your ideas, concerns and successes with. And where I do have a mentor and wonderful support from other entrepreneurs in my peer group, I don’t always feel comfortable reaching out.

What if they are busy with their stuff? What if they think I’m being silly and judge me for how I feel? What if, what if, what if. I call it the “What If” Syndrome. The mind is so creative in coming up with all the negative scenarios and fears, often keeping us from moving forward.

So you may be wondering, what happened? I had a video call scheduled with a friend of mine. Not going to a physical office each day, and with a number of my peers around the world, many of my calls are video calls to make the connections more personal. I will admit though on some days I wish I was Jane Jetson and could just use that mask she did when I am having a bad hair day or choose to “dress down”.

So here I find myself on a video call with a friend who lives two time zones away, so I don’t see her often other than on video. I always look forward to talking to this person because I leave each call feeling uplifted from the stories and laughter we share. So although I was in my down mood, I took the call doing my best not to let my sadness and frustration ooze through the computer.

In reality it only took her asking me a few questions about how I was doing for me to share some of my recent challenges. I let them flow and she took it all in stride. She listened. In only a few minutes she was sharing how she understood, and with some feelings I was experiencing, could relate. She guided me through inquiry to determine what I was going to do to move forward, and through it I saw my path.

I reciprocated on the call, although I’m sure she would have been happy just to be supported, but together we commiserated, laughed and solved a lot of our issues, or at least put a plan in place to do so. We each committed what our next steps would be and when we would have them done, knowing that the other would hold us accountable.

I left that call renewed and refocused. It was a bigger gift than I could have dreamt from speaking to this person. It was then I realized how silly I had been in hesitating to reach out to someone else for support. It was my own insecurities and fears, that “What If” Syndrome that prevented me from moving forward earlier. She and probably anyone else I reached out to would always have my back by listening and supporting versus judging. My biggest mistake was not trusting that they would.

A week later I was chatting online with someone and she shared what a difficult place she was in. I offered to get on a video chat with her to listen and lend my support. Her initial response was that she needed to process it internally first. If she could have seen me at that moment, she would have seen a smile come to my face. Not because I was judging her but because she was where I was a week before. Rather than letting others in, she was opting to handle it herself first. I shared with her my experience and left the door open for her to reach out.

It is not an uncommon story for someone struggling to feel alone and that they can’t reach out. Sometimes it is associated with work, sometimes personal. At times it can feel like the most vulnerable thing to share those types of feelings with others. The important thing to remember is that you are never alone. Whether it is a peer, a friend, a family member, or a hotline, there is always someone out there that provide support. Maybe it is just lending an ear to listen or maybe it’s helping to create a plan or set a direction. Whatever the level of support you require, I suggest not waiting and inviting in the support sooner rather than later.

When have you felt challenged or alone and finally reached out for help, and how did that move you forward?

PrevPreviousWriting a Status Report for Yourself
NextDo you have this Key Trait of a Successful Leader ?Next