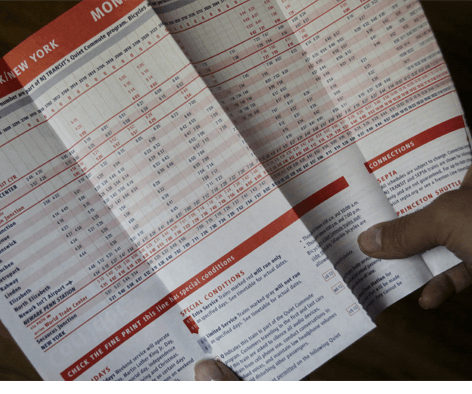 Stepping Out to Help a Stranger

At the end of a long day in the city, I often want to get on my train home and keep to myself. It is my time to unwind and transition into home life. Recently though I stepped out of my routine to help someone. As I stood at Penn Station in NY, waiting for my track to post I noticed a young mother with her child, who was about three. The mother seemed tense as she tried to figure out what train to catch and which track it would be on.

For those that have never been to Penn Station or are unfamiliar with large train terminals, it can be a bit confusing. Train routes may vary on what stops they make, so it is necessary to identify if your stop is included; and tracks are often not posted until ten minutes or less from the time the train is scheduled to depart. It can be unclear. This was obviously making the mother stressed, and in turn her daughter was getting upset and crying.

It would be easy to stay in my cocoon and not pay any attention, but instead I approached the woman and asked if I could help. She looked up from her schedule with what looked like relief, took a breath and I could physically see her shoulders release down. She accepted my offer as she explained where she was trying to go. I identified the next train for her and shared that she would have to wait for the track to post. It happened to be the same train I was waiting on so I offered to walk with her when we knew where to go. Again it seemed like a weight had been lifted off her shoulders.

As we waited, I began to smile at her daughter who had begun to calm down but still had some irritation. As I tried to entertain her by making faces, she mimicked me. She began to laugh and relax. Shortly later our train posted and where I would normally rush to the track to get settled in a seat and begin to decompress, instead I took a casual pace walking with the mother and daughter.

We got to the train and she shared she was afraid she would not know where to get off. To help ease that burden I offered to sit in the area that she had chosen and would tell her when we were approaching her stop. Now I need to add that where she chose to sit were very uncomfortable seats compared to other areas of the train. They were smaller and stiffer, but I didn’t want to add stress by suggesting a change or by leaving to go to my usual spot. So there we sat as the train ride began.

I chatted with the woman as she explained it was her first time on a train out of New York and she was visiting a friend. Her daughter became restless, so once again I began to engage her. Then she began engaging others sitting close by and you saw smiles on peoples’ faces; the people who similar to me, probably usually just focus inward on the trip home. The smiles were contagious and it was fun to watch.

As we approached the woman’s stop I indicated that she was soon to arrive. As we pulled into the station she thanked me for my help, grabbed the hand of her child and off they went. I too got up, but to go find a more comfortable seat for the remainder of the ride.

Although I did not have my normal wind down time, my interaction with woman and her child had helped me to transition from my day. In addition, I knew that my simple reaching out helped someone in what was a frustrating situation. As an added bonus getting the little girl to smile and reach out to others hopefully helped others transition and bring an extra smile to their day.

When have you stepped out of your routine or yourself to help someone? How did it make you feel?

PrevPreviousIs it Magic or Am I Just Not Getting It?
NextDo You Know How You Have Impacted Others?Next